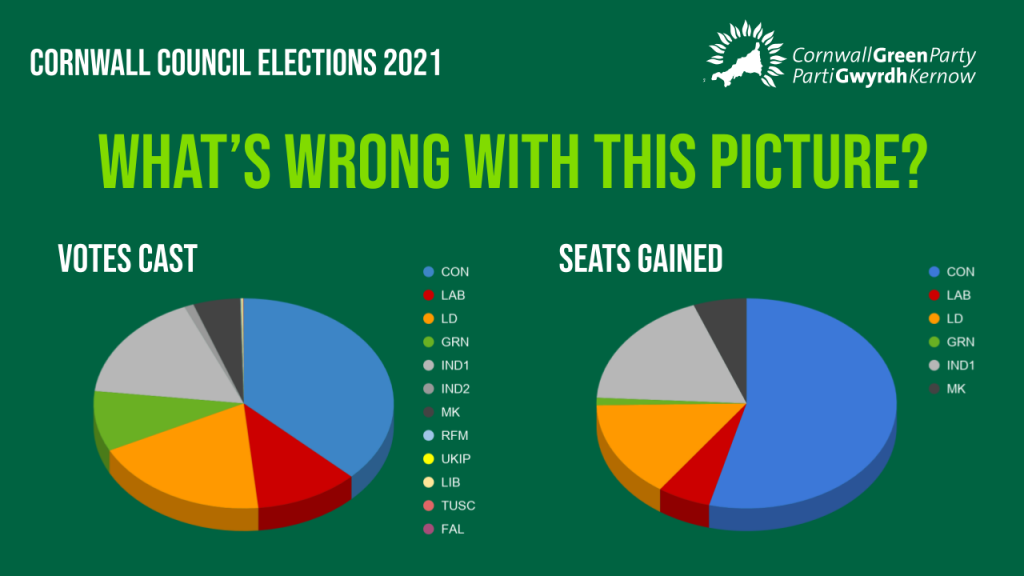 Cornwall Greens are calling for urgent reform of the electoral system after the party received over 9% of the vote, but only 1% of the seats on Cornwall Council.

“Once again an undemocratic electoral system has ignored the majority of Cornish voters. We now have to suffer a Tory council despite the fact they received barely more than a third of the vote. We need a proportionate system that makes votes matter. It’s no wonder that turnout is so low when most votes are ignored.

“At the core of Green Party principles is a commitment to deliver better democracy. We believe that’s the only way to respond to the climate and ecological emergency. We can only make a fair transition to a net-zero-Carbon future if everyone has a real stake, and local people can make local decisions about the things that affect their lives.

"The political chaos of the last few years is the result of a fundamentally undemocratic system. At every election, most people’s votes are not represented by the winner.

“In this election the Green Party in Cornwall received 15,911 votes of which 15,389 (97%) were essentially ignored. These are not just votes to represent the people of Cornwall, but to represent the natural world of which we are a part and on which we all rely. We cannot continue with a broken system that does so much damage to our society and our planet. We need electoral reform, now!

“Of course the Conservatives don’t want to give people a voice if it means losing their grip on power. But the fault lies equally with the Labour Party. Despite their supposedly democratic principles they are the only left-of-centre party in Europe not to support electoral reform. It’s Labour’s quest for total control that keeps handing power to the Tories.

“Greens will continue to put better democracy at the heart of all we do, to achieve real local decision-making power for local communities. A proportionate electoral system is essential to achieve this, as is much greater devolution of power from Westminster to Cornwall.”